One of the most scenic and naturally beautiful areas in Taiwan, Taroko Gorge is home to some of the most stunning locations on the island. With the worlds largest marble canyon and a rich history and culture, Taroko Gorge has become a must see region for travelers looking to get away from the urban centers while in Taiwan. Here are 10 of our favorite trails and scenic walks when visiting the Gorge. Most these and more are visited in the top rated Better Taroko Gorge Tour.

For more information, be sure to download our 2020 Hualien Visitors Guide. We hope you enjoy!

1. The Tunnel Of Nine Turns

The King has returned! Just reopened in 2019 after being closed for 7 years, the Tunnel Of Nine Turns follows 700 meters (each way) of the old Cross-mountain Highway through a truly spectacular section of the gorge. With awe-inspiring, dramatic views at every turn (it feels like there are more than nine!), this trail holds a diversity and enormity you have to see to really believe. Bring your cameras, your wide angle lenses and set your Instagram to stun, the Tunnel of Nine Turns is sure to get you that wow factor.

Visiting the Nine Turns is a bit tricky as there is NOWHERE TO PARK anywhere near the trail head.  The easiest way to visit this must-see section of the Gorge is via a small group tour such as Island Life Taiwan’s Better Taroko Gorge Tour where you will be dropped at the trail head and picked up after you’ve had a good amount of time to explore.

This 1.37km “trail” is actually another paved piece of the old highway but is one of the most spectacular areas in Taroko Gorge. The narrow canyon bares sheer rock cliffs on both sides and features one of the narrowest, deepest and swiftest, sections of the Liwu River. The towering 700-meter-tall cliffs here are covered with deep pock marks formed by thousands of years of sand and grit abrasion as the water slowly carved the deep canyon.

The name “Swallow Grotto” comes from the swallows (a small endemic bird) that used to nest in the cavities in the cliffs. As warm air would rush through the narrow canyon from the sea, it would bring along thousands of insects for the birds to feast on! Keep an eye out for “Chieftains Profile Rock”, the “View of Taiwan” and the towering “Zhuilu Cliffs”. This is a MUST SEE trail, though it closes occasionally due to rock falls. Island Life’s Early Start Taroko Gorge Tour typically visits this trail before the large tour buses arrive.

This 4.4km riverside trail (the first 1.5km is the most beautiful) is one of the more accessible and stunning areas of the park. Originally known as the “Mysterious Valley Trail”, it was renamed “Shakadang” in 2001. Shakadang means “tooth” in the Truku aboriginal language, and the story goes that when the Truku settled the river valley 250 years ago, they exhumed many large rocks that resembled giant teeth and thus named their village and the bright blue river “Shakadang”. Some people still claim they were in fact dinosaur teeth!

The trail as it exists today was carved by the Japanese in the early 20th century. They were much shorter than most people today so watch your head! In the flat areas with enough soil to support them, Camphor and fig trees dominate, and the fruit of the fig trees are popular with many animals including the Formosan macaque. Some Autumn Maples, Crape Mertles and even a few Oak grow along the trail. Many types of fish, freshwater shrimp, crab and frogs populate the shockingly blue river.

Do you like heights?! Do you like the idea of walking on a 90cm wide trail carved into the side of a cliff, 700 METERS above the canyon floor?! Did we mention, no ropes or guardrails? Welcome to the Zhuliu Old Trail. An old Truku tribal hunting path, widened slightly by the Japanese military during their occupation of Taiwan, this trail is a once in a lifetime experience for the daring amongst us. The 6 km roundtrip hike is not for the faint-hearted as you will spend between 3 to 6 hours in total hiking up and down the trail. The 2.5km hike up the mountain to the cliff portion often requires rest stops to catch your breath and coming down requires breaks to give your knees and thighs a rest.

Several suspension bridges await you on the trail as well. Bring plenty of water and snacks as there is nowhere to obtain either on the trail. Trekking poles can be helpful as well for the steep portions. This trail REQUIRES SPECIAL PREARRANGED PERMITS and has very regulated access. Book ahead as a limited number of permits are issued each day. This trail is most typically visited via a Zhuliu Old Trail Tour that will arrange all necessary permits and transport.

Not to be confused with the Lushui-Wenshan Trail, the much smaller Lushui Trail is an easily accessible 1km trail that passes through a small stone tunnel (bring a flashlight!) and meanders along a cliff and through the forest. The trail itself is part of the old Cross-Hehuan Mountain Road (like the Zhuilu Old Trail) and was widened to 1.5 Meters by the Japanese as a means to move large armaments into the area to attack the resistant Truku tribe. The rare Taroko Oak grows on the path and is considered a symbol of vitality. Keep an eye out for basketball shaped clumps of dirt in the trees. They’re actually ants nests! 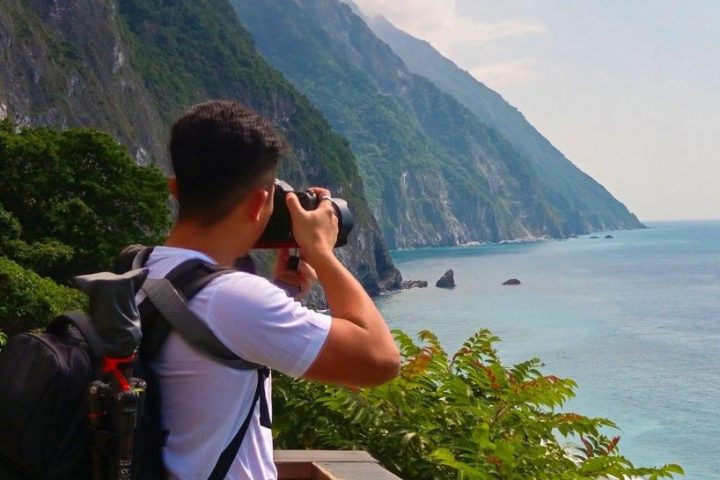 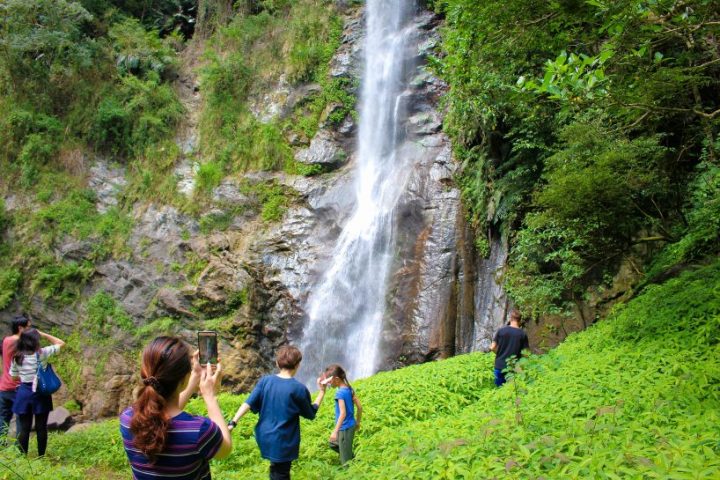 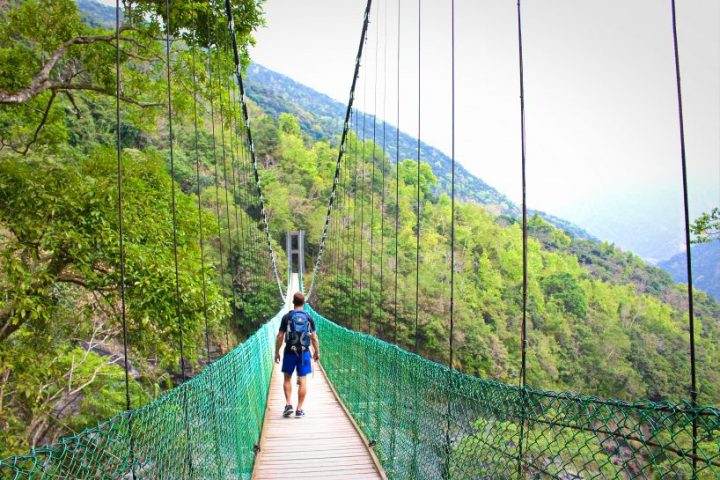 This short trail carved into a cliff above the Liwu River takes you to the stunning Eternal Springs Shrine temple complex. This amazing shrine, built atop a spring fed waterfall, commemorates the 226 people that died during the construction of the Central Cross Island Highway between 1956-1960. One of the most photo worthy spots in the park, expect large crowds and tour buses throughout the day, so get there early. Above the shrine can be seen two beautiful pagodas in the mountains. They are the Taroko Tower and the Bell Tower.

This 2.1km trail passes through verdant forest and SEVEN TUNNELS on its way to the giant Baiyang Waterfall. Originally built in the 1984 as an access road by Taipower, the state-run utility, the area was intended to be the site of a hydroelectric damn until the establishment of the National Park, prevented it. The name “Baiyang” comes from the Truku name for the Truku village that once existed in this area.

The tiered waterfall at the end of the trail is known as “da-ou-la-ss” to the local Truku tribe. Waterfall of the cliffs. Keep an eye out for “Elephant Rock” and bring a flashlight for the many tunnels. At the end of this trail is the access point for the Water Curtain Cave, so bring along a raincoat or an umbrella as well! Note that this trail is PAST the village of Tianxiang and is inaccessible by bus.

One of the longest and most taxing trails in the park, the 5.5km Lushui-Wenshan trail is a true adventure into the Taroko Gorge wilderness. Used by both the Truku tribe and the Japanese during occupation, this trail is loaded with history. In fact, the stone remains of several Japanese outposts can still be seen along the trail today! With significant elevation rises and drops, this trail is definitely for the physically fit.

Winding through subtropical broadleaf forest, over suspension bridges and crossing several mountain streams, it is entirely possible to not see any other people along the 3-5 hour hike. The trail head is accessed from a tunnel bridge above the Wenshan river area several kilometers past Tianxiang. It is not accessible by bus and is difficult to locate so most people use a Lushui-Wenshan Tour to arrange the tricky transportation and handle police permits. The end of the trail is at the Mountaineering school near Lushui-Heilu. A mountaineering permit is required and can be obtained at the Tianxiang Police Department.

From Changuang Temple, this steep trail takes you over a long suspension bridge and up to the magical Bell Tower. The beautiful and ornate Changuang Temple itself is actually a Zen Monestary, and the river valley next to it is named Bottle Gourd Valley (Hu-lu Gu), due to being shaped like the long local vegetable.

Crossing the suspension bridge here, you’ll walk up the lengthy “stairway to heaven” to the Bell Tower for unparalleled views. The ornate Bell Tower itself overlooks a deep river valley and is one of the more photogenic locations in the park. Head up to the 2nd floor and ring the giant bell to hear it echo into the mountains!

This 800m walk is actually part of the old Suhua Coastal Highway and offers stunning views of the famed Qingshui Cliffs. These massive cliffs come straight down from the mountains and plunge into a turquoise area of the Pacific Ocean. Outside of the main park, this area is most easily visited as part of a Taroko Gorge Tour or Zhuilu Old Trail Tour.

The short trail is also an excellent place to spot monkeys, and gives breathtaking panoramic ocean views. The towering Qingshui Cliffs themselves are 21 km long and over a kilometer high! At their highest point, they are 2km high and extend an additional 2km down into the ocean. The Qingshui Cliffs were designated in 1953 as one of Taiwan’s Eight Wonders.

While seeing all of the trails on our list by yourself would be seriously difficult, Island Life Taiwan offers well-constructed day tours to all of these places and so much more. There are so many things to do in Taiwan, and Hualien County is such a diverse and beautiful region, why would you not? 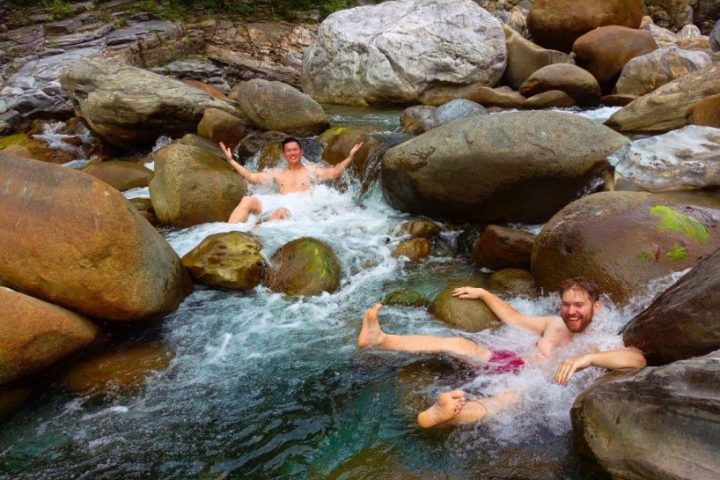 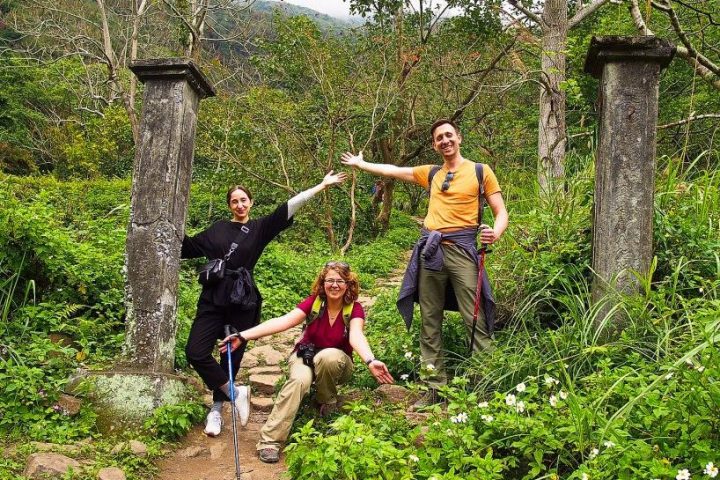 A Beautiful Day For a Hike!
CONTACT US TODAY TO PLAN YOUR VISIT

Previous postHualien Hotel Guide: The Best Neighborhoods & Where To Stay In Hualien

Fredrick
Reply
Thanks for the helpful article! Can't wait to visit Taroko with you guys soon.
daniel
Reply
Excited for you to join us!